This notebook presents the results of the 2020 Dask User Survey, which ran earlier this summer. Thanks to everyone who took the time to fill out the survey! These results help us better understand the Dask community and will guide future development efforts.

We had 240 responses to the survey (slightly fewer than last year, which had about 260). Overall things were similar to last year’s. The biggest shift in the community is a stronger demand for better performance.

Most of the questions are the same as in 2019. We added a couple questions about deployment and dashboard usage. Let’s look at those first.

Among respondents who use a Dask package to deploy a cluster (about 53% of respondents), there’s a wide spread of methods.

Dask’s learning materials are farily similar to last year. The most notable differences are from our survey form providing more options (our YouTube channel and “Gitter chat”). Other than that, https://examples.dask.org might be relatively more popular.

How do you use Dask?¶

Just like last year, we’ll look at resource usage grouped by how often they use Dask.

API usage remains about the same as last year (recall that about 20 fewer people took the survey and people can select multiple, so relative differences are most interesting). We added new choices for RAPIDS, Prefect, and XGBoost, each of which are somewhat popular (in the neighborhood of dask.Bag). 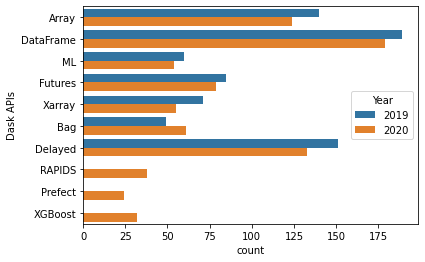 Just like last year, about 65% of our users are using Dask on a cluster at least some of the time.

But the majority of respondents also use Dask on their laptop. This highlights the importance of Dask scaling down, either for prototyping with a LocalCluster, or for out-of-core analysis using LocalCluster or one of the single-machine schedulers.

Just like last year, most repondents thought that more documentation and examples would be the most valuable improvements to the project.

One interesting change comes from looking at “Which would help you most right now?” split by API group (dask.dataframe, dask.array, etc.). Last year showed that “More examples” in my field was the most important for all API groups (first table below). But in 2020 there are some differences (second plot below).

For specific features, we made a list of things that we (as developers) thought might be important.

There really aren’t any changes compared to last year in the relative importance of each feature. Perhaps the biggest movement was in “Ease of deployment” where “Critical to me” is now relatively more popular (though it was the most popular even last year).

What other systems do you use?¶

SSH continues to be the most popular “cluster resource mananger”. This was the big surprise last year, so we put in some work to make it nicer. Aside from that, not much has changed.

Dask users are about as happy with its stability as last year. 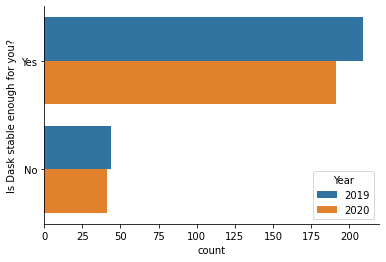 Thanks again to all the respondents. We look forward to repeating this process to identify trends over time.